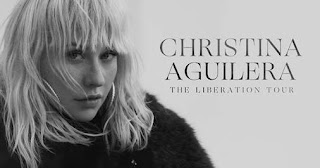 RAMA, ON (Wednesday, May 9, 2018) – Grammy Award-winning superstar and pop icon Christina Aguilera has announced a new North American tour this fall, her first outing since 2008. The Liberation Tour will kick off on September 25 and travel to 22 cities, performing at many of North America’s most intimate venues including a stop at Casino Rama Resort’s award winning Entertainment Centre, Aguilera’s only Canadian date, Thursday, October 11 (8 PM).

Christina released her new song “Accelerate feat. Ty Dolla $ign and 2 Chainz” earlier this month, the first song from her forthcoming and highly anticipated album, Liberation. She will also be performing “Fall in Line,” her newly announced duet with Demi Lovato, at the Billboard Music Awards on May 20.

Liberation will be released Friday, June 15 and is available for pre-order now. Every online ticket purchased for Christina Aguilera’s 2018 tour includes a standard CD copy of her new album, Liberation. Instructions on how to redeem a copy will be provided by Ticketmaster within 24 hours of ticket purchase via email.

TICKET INFORMATION:
Exclusive advanced ticket purchase for Facebook Fans & Players Passport™ Club Members begins on Wednesday, May 16 at 10 AM through to Thursday, May 17 at 10 PM on www.ticketmaster.ca or by calling toll free 1-877-599-RAMA (7262). A special code is required for the advance purchase period; fans are invited to visit the Casino Rama Resort Facebook page to gain access.

Tickets go on-sale to the general public on Friday, May 18 at 10 AM and will be available online at Ticektmaster.ca or by calling toll free 1-877-599-RAMA (7262). Ticket prices are inclusive of taxes and exclude any applicable service fees. Ticketmaster is the only authorized seller of Casino Rama Resort concert tickets.

PER SHOW TICKET LIMIT: Ticket limit is 6 per customer per show. Please adhere to published ticket limits. Orders exceeding the ticket limit may be cancelled without notice by Ticketmaster at its discretion. This includes duplicate orders having the same billing address or credit card.

Christina Aguilera is a Grammy Award-winning singer-songwriter renowned for her powerful voice and hit songs. Throughout her career, she has sold more than 43 million records worldwide. Aguilera has achieved five No. 1 singles on the Billboard Hot 100 chart making her the fourth female artist to top the chart over three consecutive decades (1990s, 2000s, and 2010s). She has won six Grammy Awards including one Latin Grammy Award. She has also received a star on the Hollywood Walk of Fame and holds the prestigious honor of being the only artist under the age of 30 included in Rolling Stone Magazine’s list of the 100 greatest singers of all time. In 2011 she entered the world of television as a coach on NBC’s Emmy Award nominated show The Voice. Aguilera continues to use her voice for good. She has served as global spokesperson for Yum! Brands’ World Hunger Relief effort since 2009 and has helped raise over $150 million for the World Food Program and other hunger relief agencies.

Casino Rama Resort is Ontario's only First Nations resort casino and has earned a reputation for presenting exclusive world-class sporting, entertainment & television events. The Casino offers a complete entertainment experience with over 2,500 slot machines, more than 100 gaming tables, 8 unique restaurants, a world-class 5,000 seat Entertainment Centre, and a 300-room all-suite, full-service hotel, featuring spa and health club facilities. Through the Casino Rama Cares program we are dedicated to continuing our rich history of community support by being an outstanding corporate neighbour; providing year-round assistance through a combination of charitable giving and employee volunteerism. Casino Rama Resort is operated by Penn National Gaming, Inc.

For media requiring high resolution, colour photos of this artist, please visit the Media Gallery section in the Press Centre on the Casino Rama Resort web site. Login is required; please contact Natasha Ilic to obtain.
Posted by jobby316 at 7:28 AM